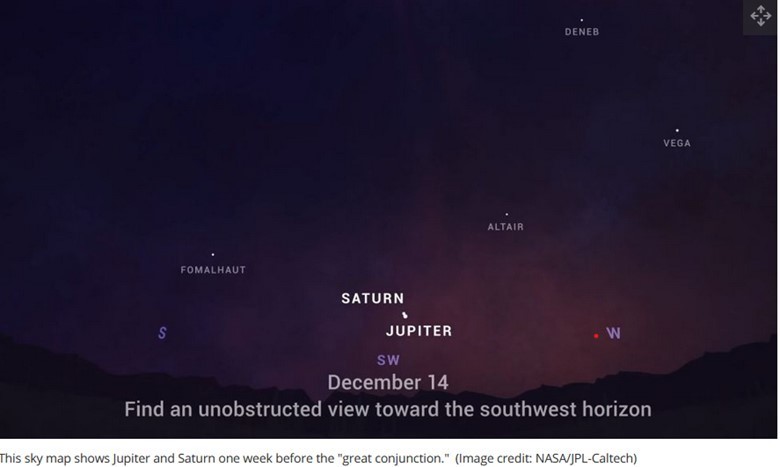 Is that the Star of Bethlehem?

Some of you will be aware that on December 21st, the winter solstice, there will be a conjunction of Jupiter and Saturn in the southwest sky just after sunset. They will be so close, just a tenth of a degree apart, that they will look like a single bright point of light. Apparently they will be near our horizon and not long after sunset, so we may not get the best look, but much of the world will catch the show. If you know that much, you will probably also be aware that because of the orbits of the planets, these alignments or conjunctions occur every 20 years and are sometimes closer and sometimes further apart. It turns out that another very close conjunction occurred in 7 BC. No less a figure than German astronomer Johannes Kepler, and many others since him, suggest that may have been the Star of Bethlehem.

Not surprisingly, I can’t tell you how likely that is. However, I can tell you that a few years ago I heard a message/presentation by Dr. John Tanner, a retired Christian scientist (perhaps astrophysicist – I’ve forgotten), who is very knowledgeable on the subject and has studied it closely for 10 years. He has been working on a book, actually a bible study guide, which is coming out in the New Year. I do remember a few of his conclusions:

1) There was a conjunction similar to this of three heavenly bodies in 6-7 BC that he is fully convinced was the Star of Bethlehem – and he is very persuasive in telling the story, accompanied by effective visuals. He has dated it very precisely.
2) These three bodies coming together would have been widely interpreted as a conjunction of royalty, a birth, and the Jewish people. Hence, the wise men asked “Where is he who is born King of the Jews?”.
3) Tanner speculates that the wise men came from the area of Babylon and that their studies of the stars may have been influenced by Babylonian records left by one of the greatest of their forebears, Daniel.
Dr. Tanner actually lives just over in the Seattle area. I’ve tracked him down and will be doing my best to get the book when it comes out. I’ll share more details at that time.

The bottom line for me is this:
1) God chose to use a scientifically verifiable phenomenon to help set the stage for the most significant birth in human history.
2) Just as Christmas is an annual reminder for all of humanity that Immanuel has come, every few years God offers additional evidence that this story is not myth, it is truth.

Lift up your heads, redemption draws near!