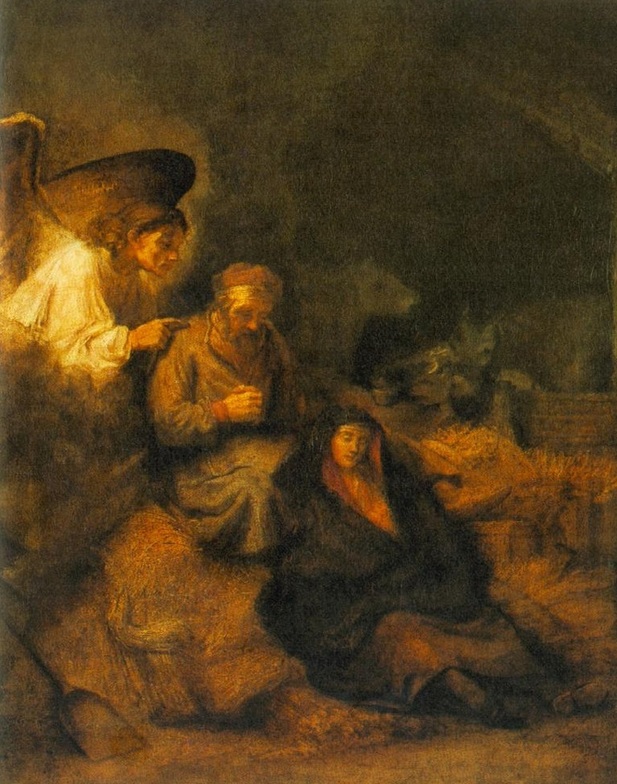 It could be said that the Church today either over-venerates Mary or under-venerates her. Joseph, well, he is barely considered. However, both deserve our admiration and imitation: look below for examples of the characters and actions of both Mary and Joseph. They internalised these traits and worked them out in practice. Their responses have much in common: humility, trust, obedience.

Luke 1:26-38, “In the sixth month of Elizabeth’s pregnancy, God sent the angel Gabriel to Nazareth, a town in Galilee, to a virgin pledged to be married to a man named Joseph, a descendant of David. The virgin’s name was Mary. The angel went to her and said, “Greetings, you who are highly favored! The Lord is with you.”
Mary was greatly troubled at his words and wondered what kind of greeting this might be. But the angel said to her, “Do not be afraid, Mary; you have found favour with God. You will conceive and give birth to a son, and you are to call him Jesus. He will be great and will be called the Son of the Most High. The Lord God will give him the throne of his father David, and he will reign over Jacob’s descendants forever; his kingdom will never end.”
“How will this be,” Mary asked the angel, “since I am a virgin?”
The angel answered, “The Holy Spirit will come on you, and the power of the Most High will overshadow you. So the holy one to be born will be called the Son of God. Even Elizabeth your relative is going to have a child in her old age, and she who was said to be unable to conceive is in her sixth month. For no word from God will ever fail.”
“I am the Lord’s servant,” Mary answered. “May your word to me be fulfilled.” Then the angel left her.”

Imagine a teenage girl having this encounter! This virgin girl showed remarkable faith, accepted what God had planned for her and was willing to obey.

... continuing at verse 46:
And Mary said: “My soul glorifies the Lord
and my spirit rejoices in God my Savior,
for he has been mindful
of the humble state of his servant.
From now on all generations will call me blessed,
for the Mighty One has done great things for me—
holy is his name.
His mercy extends to those who fear him,
from generation to generation.
He has performed mighty deeds with his arm;
he has scattered those who are proud in their inmost thoughts.
He has brought down rulers from their thrones
but has lifted up the humble.
He has filled the hungry with good things
but has sent the rich away empty.
He has helped his servant Israel,
remembering to be merciful
to Abraham and his descendants forever,
just as he promised our ancestors.”

She was humble but accepted what God has for her. Elizabeth Elliot says that Mary was “strong enough and holy enough to recognize her place under God. Thoughts of what people would say, what Joseph her fiancé would say, or how she would ever convince them that she had not been unfaithful were instantly set aside.”

The Dream of Joseph (about 1650-55) is one of two paintings by Rembrandt on this topic. The Flemish painter depicts Christ’s earthly father who agrees to wed Mary when he discovers she is pregnant. From Matthew’s gospel, he depicts God’s angel appearing to Joseph in a dream explaining the divine conception and instructing him to name the child Jesus. Joseph received no less than four dreams from God.

Dream One. In the first dream, he is told that he should not be afraid to take Mary as his wife, and why.
Matthew 1:20-25, “An angel of the Lord appeared to him in a dream and said, “Joseph son of David, do not be afraid to take Mary home as your wife, because what is conceived in her is from the Holy Spirit. She will give birth to a son, and you are to give him the name Jesus, because he will save his people from their sins.” All this took place to fulfill what the Lord had said through the prophet: “The virgin will conceive and give birth to a son, and they will call him Immanuel” (which means “God with us”). When Joseph woke up, he did what the angel of the Lord had commanded him and took Mary home as his wife. But he did not consummate their marriage until she gave birth to a son. And he gave him the name Jesus.”

Dream Two. The second dream is after the birth of Christ. Joseph is warned by an angel to take the Mary and Christ and flee from Bethlehem to Egypt to escape Herod.
Matthew 2: 13-15, When they had gone, an angel of the Lord appeared to Joseph in a dream. “Get up,” he said, “take the child and his mother and escape to Egypt. Stay there until I tell you, for Herod is going to search for the child to kill him.” So he got up, took the child and his mother during the night and left for Egypt, where he stayed until the death of Herod. And so was fulfilled what the Lord had said through the prophet: “Out of Egypt I called my son.”

Dream Four. Instead of going to Judea, Joseph acts upon the dream to take his family to Galilee.
Matthew 2: 22-23, But when he heard that Archelaus was reigning in Judea in place of his father Herod, he was afraid to go there. Having been warned in a dream, he withdrew to the district of Galilee, and he went and lived in a town called Nazareth. So was fulfilled what was said through the prophets, that he would be called a Nazarene.