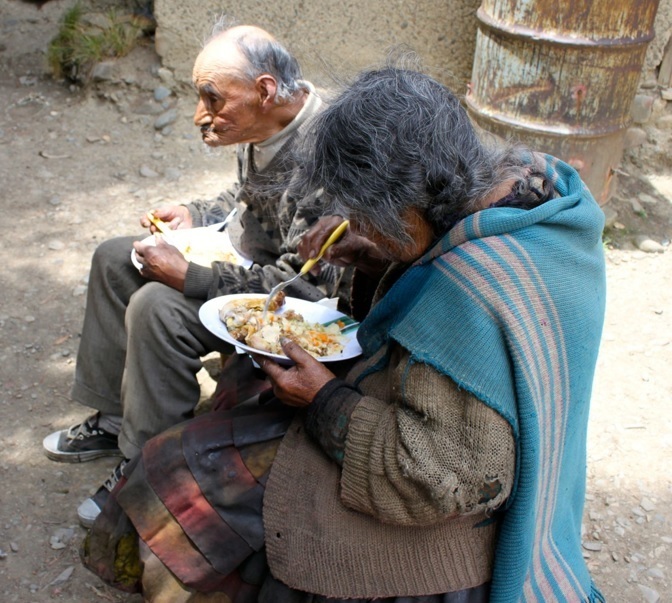 Psalm 113:7: He raises the poor from the dust and lifts the needy from the ash heap.
Psalm 107:9: For he satisfies the thirsty and fills the hungry with good things.
2 Co 8:9: For you know the grace of our Lord Jesus Christ, that though he was rich, yet for your sake he became poor, so that you through his poverty might become rich.

How can we live as Christ followers in a world that suffers poverty?

Poverty isn’t something easy to talk about; it is complex, difficult to define, and challenging to respond. Throughout Scripture the poor are always mentioned, often given center stage in Jesus’ teachings and thus we feel uneasy when asked how effectively are we responding to those in need. This year the pandemic has shown that the dilemma of poverty, homelessness, drug use and addiction need more attention to gain better resolve.

Bolivia was my first opportunity to see unabashed economical poverty. Carlos and I lived 15 years in a district called Llojeta. When we moved it was considered one of the poorer neighbourhoods and referred to as the garbage dump because the access was through a ravine that for years was used for disposing city waste. At first there were few houses in comparison to open fields where animals grazed; utilities were limited; and the dirt road was almost inaccessible during rainy season. The area had all the feel of rural life although it was close to La Paz city center.

We visited house by house in this area to establish a presence with the purpose of church planting. That was how we met Don Silverio and Doña Panchita, an elderly childless couple who lived in a windowless dirt floor adobe hut with one light bulb and no other installations. They cooked on open fire, received water from the street; and earned their daily food collecting herbs on the hills and selling in the market. Their wrinkled leathery faces, stooped backs and sunken eyes spoke of difficult lives. They were poor but also offspring death, abandon, and resentment were other well-known enemies. To our amazement they considered us friends and when our doorbell would ring at 5:00 in the morning, we knew they had come for a visit. We would put the kettle on, they usually brought bread, and we introduced them to jam, cheese and even peanut butter. Anything extra was a treat for their plain breakfast bun. At first their morning visits were more of an annoyance than a welcome. Carlos would attend the gate while I quickly jumped out of bed and got the table ready to receive them. Their visits were never quiet as Silverio was very deaf and one had to yell everything at least twice and often more. But we have many memories of laughter, tears, life stories and strengthening prayers shared around our breakfast table. It was when we moved down the valley and lived too far for their visits that we realized how much we missed their loyal and consistent friendship.

Our first Christmas as empty nesters we celebrated the customary 24th at midnight but on Christmas day were on our own with a cooked chicken and wondering what to do. We decided to pack up the meal and head to Llojeta to see if we could find Silverio and Panchita. They were home but had no idea that it was Christmas or how it was celebrated let alone have a place for serving a meal. A plank of wood was found and laid on the ground for spreading out the food. They scrambled to find four plates and spoons we could use to eat. Our roast chicken, mashed potatoes, and cooked veg was a simple meal but that day eating it on an Andean mountainside with their squeals of delight to be together again made it a most memorable feast.

Often Carlos and I talk about what endeared us so much to our friends. We had huge differences in culture, customs, age, and experiences. Silverio had his way of understanding life and was very stubborn about accepting other options or opinions. A hard life had given him a hard crust that wasn’t easy to crack. But he was authentic, honest to the core, and at times vulnerable enough to allow us see his heart and hear his cries of suffering. Poverty can be shameful and like all brokenness we prefer to hide and not allow anyone see what is behind our fake smiles. Our friends’ greatest gift was to allow us into their lives; their sincerity gave us the chance to look at poverty from a different angle. It was listening to their stories that we began to see them differently, bridges were built that crossed the differences and gave a mutual sense of belonging.

Advent invites us to pause and think about poverty. Jesus’ birth story is shocking when we recognize to what extent God identified with the poverty of our humanness. Our God left the splendour of his created heavens to be born in a manger. He renounced his sovereign dominion and entered a young Jewish girl’s womb and then was taken away from his own country as a refugee. That first Advent few people on earth applauded his arrival but his coming opened the door to the greatest Kingdom of all ages. It was God’s way of building a bridge so that all humanity could be welcomed into his family.

During this week of Advent take time to sit with Jesus’ example of poverty. Ask prayerfully what you need to learn from his birth, life and death. Then ponder on what you recognize as poverty in your life and listen to what God says to you; maybe in Scripture or through others or a thought that is impressed deeply and personally on your heart. Give thanks. Lastly, ask God how you should respond to the poverty you see in others, in your community or beyond. This week take a long and deep look at how as Christ followers we can respond to those who have less than enough.